The Twitterverse, online and traditional media worlds were if not alight then certainly smouldering with the news of a security breach as a result of pictures being published showing the Prince in a normal day at the office. At first I couldn’t work out why the press was saying that username and passwords were at risk, especially as the main photograph showed the Prince at a computer screen. Surely passwords are always obscured at a login prompt?

Even the MOD can’t have such bespoke systems that they clearly show passwords on a screen? I even Tweeted that surely this must have been, therefore, a Post It fail rather than technology fail. Thankfully there were further Tweets and further analysis of the situation, and it was the Naked Software blog that finally made sense of it all.

Unbelievably it was a Post It fail… or at least a piece of A4 taped to the wall fail. 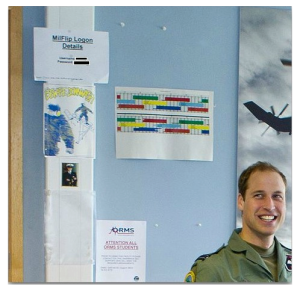 My personal analysis of this may be a little different from most infosec professionals, in that what was exposed was probably not that serious. A username and password was effectively leaked for what was probably an unclassified part of the MOD network (or whatever the correct terminology is). This physical network is probably behind fences and locks and soldiers with guns (or heaven forbid, the MOD Police), and probably didn’t even have anything interesting on it. I do of course think those in charge were right to change the password and username though, as that is obviously  sensible precaution, but after that point, so what?

That said, what i think this does highlight is a dreadful failure of the security “attitude test” by the personnel and leadership of that base. How on earth it could have been deemed as acceptable to have a username and password, of any description, taped to a wall, no matter how secure the environment, is beyond me. Firstly, this means that a generic account is in use, a fundamental no-no in anyone’s book, but also it indicates that it is acceptable to do other things born of convenience. Share files on a USB between here and home – no problems! Carry printed flight rosters and contact details in your manilla envelope out of the base – of course! The mere act of allowing this to happen means there are already shoddy security practises at work in this base and their head of security should investigate immediately (and be slightly ashamed. As an aside I was also surprised at the Prince to be honest; here is someone who must have had security training to the nth degree given his position, and he is stood, smiling, right next to the picture.

It reminds me of why I make such a big deal of using lock leads in the office. The actual risk of having a laptop stolen from your own office in the middle of the day is fairly low (overnight the risk rises of course, but we don’t leave laptops out overnight do we?!). I often cite the example of a fire alarm and subsequent evacuation, and laptops being removed/stolen by the last person on the floor, but again, this is an unlikely event. my main driver for the lock lead is because the very physical act of attaching your laptop to a lock lead first thing in the morning is a strong reminder of the need for security, and puts that person into a more security aware frame of mind. If they take their laptop into a meeting room, again the act of unlocking it is a reminder again. I have argued before that security awareness training does not interact with people often enough to influence their behaviour in any measurable way, but if we can encourage the use of lock leads throughout the organisation much of the battle is won.

Really, if the MOD gets this wrong, what hope is there for the rest of us?